Was a rainy day, so we spent the morning catching up with plans and messages.
Finally leaving the hostel, we left solo for the Music Museum. It had an exhibit on the Czech symbology of death and music but the main rooms held cool old instruments of the past. They even owned an old harpsichord that they believe Mozart played for the royal family. Afterwards we tried our first traditional czech desert, trdelnik. kinda like a hard crepe rolled in a tube and covered in your choice of sugars, or jams. We continued snacking but in a very different atmosphere of the Medieval Tavern under the royal palace. They claim they have been open ever day since the 1300s, and hosted famous people such as Mozart (of course), and Jaroslav Hasek. The place was well below street level and the only light source of a few sparsely placed candles, danced off the ceiling that was covered in human skulls... Quite the experience despite missing the flame and belly dancing. Our beers were slammed on the table, we ate pickled cheese (very tasty), and our bill was stabbed onto our wooden table with a large knife!!! 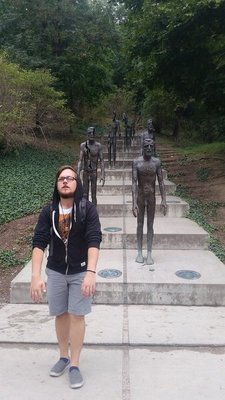 Previous Next Table of contents

Comments on this blog entry are now closed to non-Travellerspoint members. You can still leave a comment if you are a member of Travellerspoint.

If you aren't a member of Travellerspoint yet, you can join for free.